In post-Prohibition 1930s America, it was common to perceive alcoholism as a moral failing, and the medical profession standards of the time treated it as a condition that was likely incurable and lethal.[2] Those without financial resources found help through state hospitals, the Salvation Army, or other charitable and religious groups. Those who could afford psychiatrists or hospitals were subjected to a treatment with Barbiturate and Belladonna known as “purge and puke”[3] or were left in long-term asylum treatment. 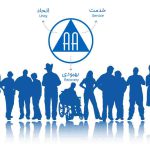